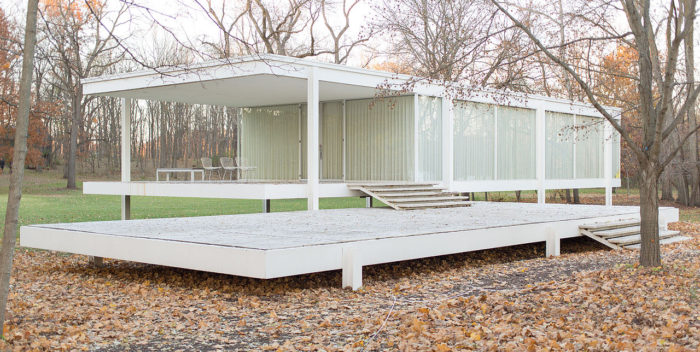 It’s not that long ago that Jeff Bridges won his Academy Award for “Crazy Heart,” directed by Scott Cooper. Maggie Gyllenhaal was his co-star and she was nominated for an Oscar as well. The pair proved to be a great success.

Now I can tell you that Bridges and Gyllenhaal will reunite soon to shoot a most unusual reunion. They will play famed architect Mies van der Rohe and his most well known client, Dr. Edith Farnsworth, a prominent Chicago nephrologist. In 1945, Dr. Farnsworth commissioned a glass house from van der Rohe, which he built outside of Chicago in Plano, Illinois.

The 1500 square foot, set on a 60 acre estate, is now a museum, considered an architectural masterpiece. It was placed in the National Register of Historic Homes in 2004.

van der Rohe and Farnsworth had a highly unusual relationship, apparently, with the house becoming the “child” in their marriage.

A source tells me: “Jeff and Maggie have been looking for another movie to do, and this script really appealed to them.”

I’m told the project is coming together quickly. In the meantime, Bridges is busy celebrating his Oscar nomination for “Hell or High Water.” Gyllenhaal is looking forward to her hot HBO series “The Deuce” with James Franco which will be unveiled in September.