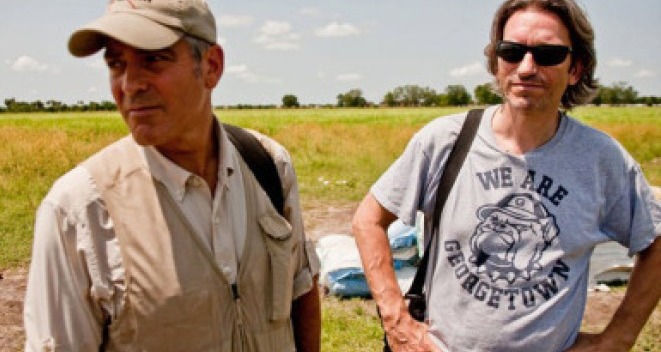 EXCLUSIVE Here’s something that’s kind of an open secret but has escaped our attention completely: George Clooney and friends have a satellite– an actual, real up-in-space satellite– that hovers over the Sudan taking pictures every day. The satellite gathers information about atrocities exacted by Sudanese war lords on its people–especially in Darfur. The pictures and videos are posted to a website run by Clooney’s charity.

Now that People magazine and Hello in the UK have forked over millions for the exclusive to Clooney’s wedding this weekend to Amal Alamuddin, the Oscar winning actor can use the money to support the satellite. According to reports about his romance with Amal, the two had discussed shortly after meeting last year putting a satellite up over Syria to watch that vicious government.

Many thoughts arise including: if George Clooney can do this over Sudan and Syria, why isn’t the U.S. government watching the rest of the world this way? And, can anyone with money do this? (For example, can I launch a spy satellite over Hollywood?)

Clooney, producer Jerry Weintraub, actors Don Cheadle and Matt Damon started a charity a few years ago called Not On Our Watch. It was intended to raise money to help the people of Darfur. Clooney has been heroic in his efforts to help the Sudanese.

Four years ago he launched Satellite Sentinel. He’s talked about it vaguely, and there are occasionally press releases about it. I guess no one reads them since no major media except Time, in 2010, has written much about it or the depth of the program. Last year Clooney wrote an essay about Darfur for The Daily Beast and never mentioned it. Satellite Sentinel was described as “an initiative focused on preventing mass atrocities.”

Meanwhile, Not On Our Watch has quietly continued to help fund Satellite Sentinel. In 2012, according to the group’s Form 990, that amounted to almost $2 million. Clooney is the CEO and runs it along with activist John Prendergast.

When Clooney and Prendergast started the project, Google was heavily involved in helping them. The company that runs the satellites– called Digital Globe– was key to setting up Google Maps. (I don’t think we know a fraction of what Google is doing all day; it’s not just search engines.)

From the Satellite Sentinel website: “The project works like this: DigitalGlobe satellites passing over Sudan and South Sudan capture imagery of possible threats to civilians, detect bombed and razed villages, or note other evidence of pending mass violence. Experts at DigitalGlobe work with the Enough Project to analyze imagery and information from sources on the ground to produce reports.”

Redford has Sundance, Sting has the Rainforest, Bono has Africa, but no celebrity, as far as I can tell, has a satellite. Strangely, the subject never came up once last year when Clooney was helping to promote “Gravity,” a movie about outer space. When his character went sailing out among the stars, he might have passed Clooney’s Sudan satellite. Maybe it got a picture of him.

Watch this video which so far has just 1,087 views: