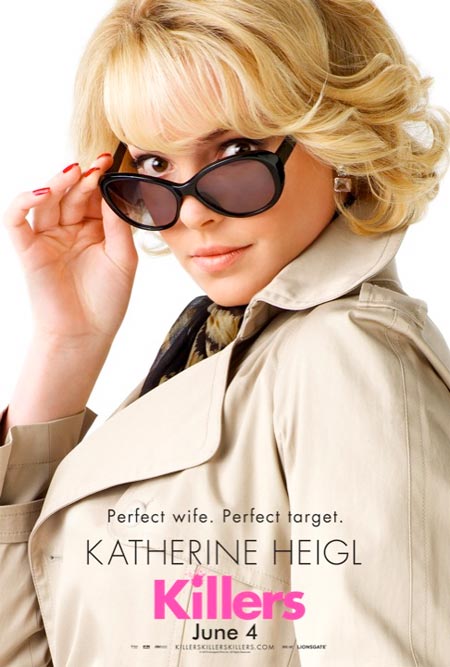 So far, Katherine Heigl’s movie career is not what you’d call a march to the Oscars.

Today, someone (Lions Gate) is releasing “Killers” starring Heigl and Ashton (Mr. Demi Moore) Kutcher. It’s the worst movie of the year, maybe including 2008 and 2009. No one’s reviewing it today because there were no critics screenings. Rotten Tomatoes can’t rate it because it has just four reviews. They are not positive.

On the imdb.com website, there’s a good review of “Killers” from, of all places, Egypt.

“There are two kinds of bad movies: The so-bad-it’s-good, and so bad-it-hurts. But then, there is Killers; an amorphous blob that exists in a vacuum where no films has ever been made before. It’s not a comedy in the sense it’s assembled out of jokes and humorous conflicts — Killers constructs its own parallel universe reality and giddily makes fun of it. And it’s not an action in the sense that good guys and bad guys chase one another — Killers’ has a snake-eating-its-tail moral stance. Killers is Meta in the truest sense of the word, and it’s not even aware of it.”

Haisam Abu Samra continues: “Critically analyzing Killers is like reasoning with an alligator before it eats you alive; it’s a waste of precious time better used for self reconcile. The only shining piece of the film is Heigl’s teeth. The script seems to have begun its existence as a Mr. & Mrs. Smith book report, rewritten by a conspiracy theorist, and finally polished by an ESL student.”

Now, why isn’t this man in the Hollywood Foreign Press Association? He’s the Roger Ebert of the Nile!

Seriously, Robert Luketic is the culprit here. The director of Heigl’s awful “The Ugly Truth” started his career with “Legally Blonde,” a flukey hit that shower promise. But “Win a Date with Tad Hamilton” and “Monster in Law” are not exactly “The Palm Beach Story” and “Annie Hall.”

And then there’s Ashton Kutcher, Twitter expert and producer of “PunkD” on MTV. The former “That 70s Show” star should stick to game shows and the cult of Kabbalah. Acting is not his forte.

I took 14 producers, and at least $75 million, to cook up “The Killers,” a movie I will see in August, no doubt, on American Airlines. Until then, Katherine Heigl–who is talented and gorgeous–should consider looking for a great TV series.